By Lokomotiva – Centre for New Initiative in Arts and Culture - September 02, 2021 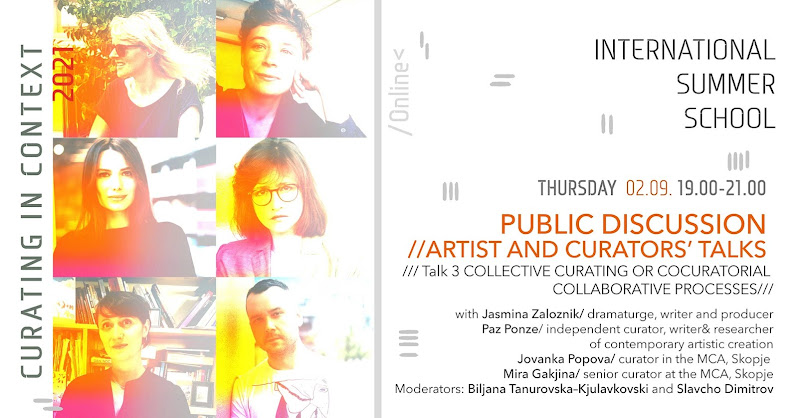 Jovanka Popova curator in the Museum of Contemporary Art, Skopje /

Jasmina Založnik is a dramaturge, publicist and producer primarily engaged in the field of contemporary dance. Over the last years, she has focused on recent histories of contemporary performing art and choreography, and their multiple relations to everyday life. She is interested in strategies of social politicization and emancipation. Her work is mainly developed in a dialogue with various colleagues, most often in close collaboration with Rok Vevar whit whom they are not only part of curatorial team of CoFestival, Nomad Dance Academy Slovenia and its wider regional network but are coauthors of number of articles, and initiations of various forms of work. Založnik is also a member of the Dialogi and Maska editorial board and a steering committee of the Contemporary Dance Association Slovenia. She holds a PhD in film and visual culture from the University of Aberdeen.

Jovanka Popova (1980, Skopje) is a curator at Museum of Contemporary Art Skopje and curator and program coordinator at press to exit project space, organization for contemporary art and curatorial practices in Skopje. She is PHD candidate at Faculty of Media and Communication, Singidunum University in Belgrade, Serbia. She completed her B.A. and M.A. at the Faculty of Philosophy, Institute for History of Art in Skopje, where she was a Teaching Assistant for the subject Macedonian Contemporary Art. She has curated exhibitions in the contemporary art field in Macedonia and worked on international curatorial projects. She was the curator of the North Macedonian Pavillion at 58 Venice Biennale in 2019. She has also presented her work at the Humboldt University, Central European University Budapest, Goethe University Frankfurt, Hankuk University of Foreign Studies, Seoul, Kunst Historisches Institut, Florence, Bahcesehir University, Istanbul, Trondheim Academy of Fine Arts and other institutions. She was executive director of JADRO Association of the independent cultural scene, Macedonia and she is a president of the Macedonian Section of the AICA International Association of Art Critics.

Mira Gakjina (Skopje) is an art historian, art critic and senior curator at Museum of Contemporary Art in Skopje. She completed her postgraduate studies at the University of Zagreb, Faculty of Philosophy (2010) and she received her PhD in Art Management on the subject “Management of the cultural institutions – case study MoCA Skopje” (2017). From 2006 till 2009 she was teaching assistant at the Faculty of Fine Arts in Skopje on the subject „History and Theory of Art“. She has curated a number of exhibitions in the country and abroad and presented her work in New York, Chengdu, Taipei, Texas, Stockholm, Warsaw, Thessaloniki, Athens, Ljubljana, Zagreb, Pristina etc. She has published her writings  in publications, catalogues and art and culture books and magazines as “Large Glass”, “Art Republic”, “Brooklyn Rail”, “Plasticity of the Planet: On Environmental Challenge for Art and Its Institutions”, “From Consideration to Commitment: Art in Critical Confrontation to Society” among others.  She was curator in residence as part of the Prohelvetia Cultural program in Zurich, Bern and Geneva; Limiditi Temporary Art Project, Morocco; “Close connection”, curatorial program in Amsterdam; International Partnership among Museums program organized by the American Association of Museums at Weil Gallery – Texas etc.; She is the commissioner of the North Macedonian Pavilion at Venice Biennale in 2019. She is also a member of the Board of Directors of the Association for Contemporary Art and Curatorial Practices "Project Space Press Exit Skopje"; From 2013 till 2017 she served as a President of AICA Macedonia. From 2017 Gakjina is a Director of the Museum of Contemporary Art in Skopje.

International summer school Curating in Context is developed in order to respond to the challenges that the growing influence of the concepts of curating and curatorial posed in the contemporary art field, beyond the sphere of visual arts. It is related to the question of the curatorial and its extended understanding which goes beyond black or white box presentation and representation politics.

The program includes lectures, seminars, artists and curators’ talks, discussions and interviews, as well as production of curatorial works and co-curatorial publication.

The summer school is intended for:

Practitioners who would like to pursue their career as curators in the contemporary performing arts or through interdisciplinary approach, and who would like to critically address representation politics and develop curatorial methods related to practices of activism, self-organization and critical reflection.

Curating in Context began as an activity developed as part of the Erasmus + project Curating in context and its partners Tanzfabrik Berlin, Stockholm University of the Arts and University of Zagreb.

This year, the Summer School Curating in Context/2021 is part of a collaboration with Brain Store Project in frame of Performance Situation Room activity of Life Long Burning project, and it is supported by the Ministry of culture, City of Skopje and Creative Europe Program of the European Union.

Curating in Context is co-curated by Biljana Tanurovska–Kjulavkovski and Slavcho Dimitrov.

Popular posts from this blog

By Lokomotiva – Centre for New Initiative in Arts and Culture - August 24, 2021 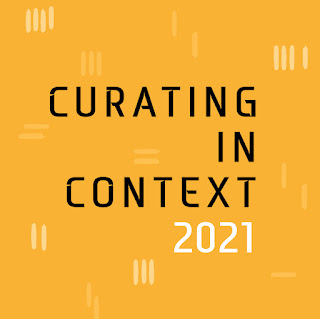 About the International Summer School “Curating in Context” 2021 The Lokomotiva team is pleased to announce the start of the second edition of the Summer School “Curating in Context” that offers critical reflection on diverse socio-political and economic contexts, as well as the possibility to develop curatorial methods to rethink the practices of contemporary (performing) arts in relation to activism, self-organization, and critical thinking. Thematically, “Curating in Context” is related to the question of the curatorial and its extended understanding, which goes beyond black or white box presentation and representation politics. The school analyzes the environment in which art is produced and disseminated, and it focuses on the creation of knowledge and opportunities for practitioners who want to pursue their career as curators in the field of performing arts and interdisciplinary approaches. Curating in Context critically re
Read more

By Lokomotiva – Centre for New Initiative in Arts and Culture - September 03, 2021

ARTISTS AND CURATORS TALKS///  Barbara Bryan, Executive director of Movement Research New York, independent art producer and curator/// presentation of her work as a curator and executive director in Movement Research///   ABSTRACT:   As the Executive Director of Movement Research, my role is to innovate curatorial and programmatic structures that hold space for the amplification of artists’ voices in curation and programmatic planning. My goal is to conceive fluid and malleable formats that support evolving and emergent practices, and new voices in the field. Questions that I ask from a curatorial framework are how to be responsive, rather than reactive, to evolving discourse and trends in experimental dance and the intersections of socio-political contexts and activism? How do we develop frameworks that have flexibility built in to the fabric of the format, and thus are not formulaic, but rather are ideations that can be stretched, reshaped and reimagined by artists. Since it
Read more

By Lokomotiva – Centre for New Initiative in Arts and Culture - September 03, 2021

ARTISTS AND CURATORS TALKS///  Ron Athey, performance artist/// presentation of his artistic work ///   Ron Athey is an American performance artist associated with body art and with extreme performance art. He has performed in the U.S. and internationally (especially in the UK and Europe). Athey's work explores challenging subjects like the relationships between desire, sexuality and traumatic experience. Many of his works include aspects of S&M in order to confront preconceived ideas about the body in relation to masculinity and religious iconography. Ron Athey's earliest work dates back to collaborations with Rozz Williams during the early 1980s. Athey and Williams performed as "Premature Ejaculation," staging actions in clubs and galleries and producing experimental recordings and performances for camera. Their work together was photographed by Karen Filter and published in the punk magazine No Mag in 1982. The practice for which he is most known gro
Read more

By Lokomotiva – Centre for New Initiative in Arts and Culture - August 26, 2020 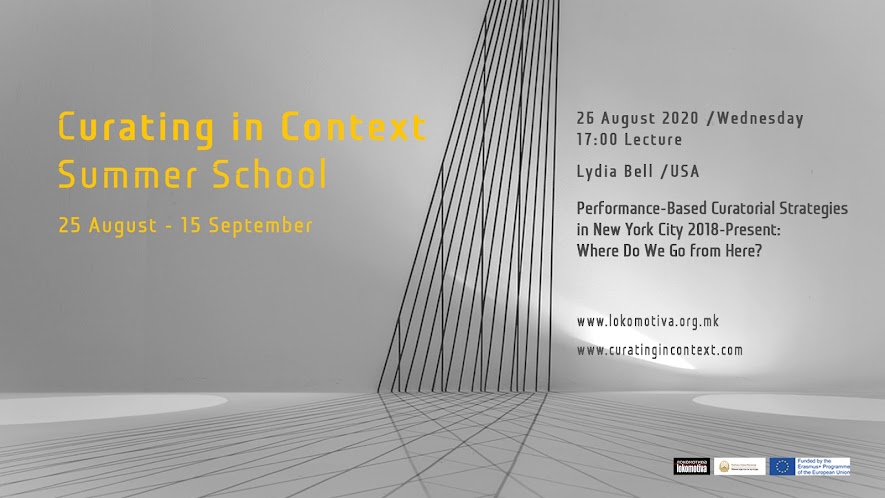 LECTURE – Lydia Bell (USA): Performance-Based Curatorial Strategies in New York City 2018-Present: Where Do We Go from Here?   Lydia Bell, U.S.-based independent curator and creative producer, will speak about curatorial strategies within the context of recent dance and performance projects in New York City. Topics will include: collective research practices, institutional interventions, de-centering whiteness, and the historical imagination. Case studies will include  Dancing Platform Praying Grounds: Blackness, Churches, and Downtown Dance , a Danspace Project Platform curated by Reggie Wilson in 2018 that examined the relationship between race, dance, and religious architecture in New York City. Another case study will be  collective terrain/s , co-organized by Bell, Jasmine Hearn, and Tatyana Tenenbaum in 2019, a collective research process into sounding in the body. Questions from these case studies to be examined include: How did civil rights grassroots activism and organizat
Read more

By Lokomotiva – Centre for New Initiative in Arts and Culture - August 25, 2020 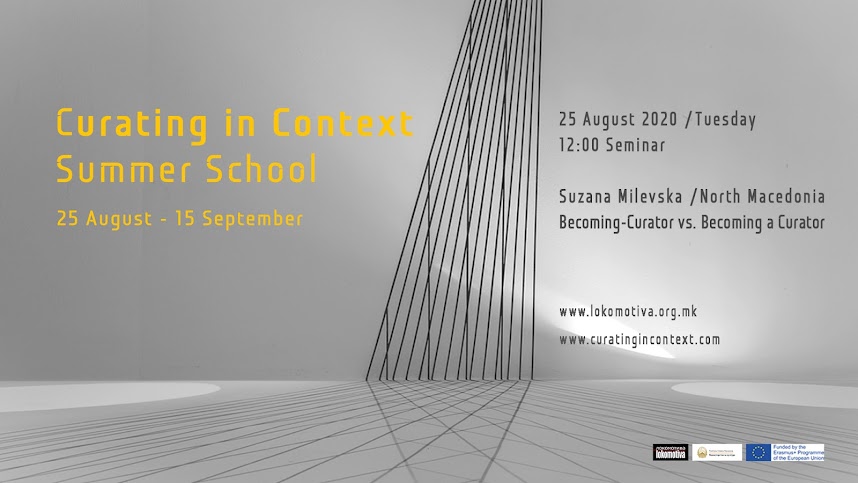 SEMINAR – Suzana Milevska (North Macedonia): Becoming-Curator vs. Becoming a Curator Abstract :  Topic Tags: Curating curatorial curator offspring curatorial agency In recent times, curating has provided a point of cross-disciplinary interchange between several distinguished disciplines and professions that deal with art. The courses and university departments that initially taught curating as a subject mainly focused on its practice, but such a dichotomy no longer exists now that curating is taught as a subject or course in many different departments and universities, and the term itself is used in a much broader terms. This presentation will therefore address the question how the concept of curatorial relates to both the theory and practice of curating. I want to argue that “curatorial” and “curatorial knowledge” have advanced into terms that encompass the condition in which philosophy, theory and epistemology are intertwined and produced a new discourse and culture that a
Read more

Lokomotiva – Centre for New Initiative in Arts and Culture
The centre was founded in 2003 in Macedonia, Skopje as a non-profit organization playing the role of a platform for education, reflection, production, discussions and research in arts and culture. It is a small organization, but is a very active participant in the building and development of the democratic socio-cultural space in Macedonia and ex-Yugoslavia region. Through its activities, Lokomotiva aims to widen the access of citizens to arts and cultural events and projects and to influence the development and support of the contemporary, dynamic art and culture as incentive in the development of the democratic society. Lokomotiva developed and implemented diverse culture and art projects, in different media and formats, such as films, performances, education, capacity building and training programmes, debates, discussions, exhibitions, researchers, advocacy activities as well we other. Lokomotiva understands culture as extended field, co-related with society, and art as experimental communication and post-discipline field that extends the forms of expression, production and dissemination.